Coming soon
SKU
9182020X
Be the first to review this product

UBEX is an optical scaling extender which allows 4K UHD@60Hz 4:4:4 uncompressed signal extension with latency-free multistreaming. The device is designed to use Video Over IP transmission on a 10G Ethernet network.

Learn More About The Unrivalled Features of UBEX

Lightware’s UBEX 10G AV-over-IP system brings a plethora of features highly-specific for esport applications, including the support of video signal resolutions up to 4K60 through HDMI 2.0 as well as seamless switching, video wall capabilities and silent operation.

UBEX is an optical scaling extender which allows 4K UHD@60Hz 4:4:4 uncompressed signal extension with latency-free multistreaming. The device is designed to use Video Over IP transmission on a 10G Ethernet network, it has standard, 10 Gbps SFP+ optical modules installed, which are field-exchangeable by the user.

UBEX units can connect to create a complex network with the use of a standard Ethernet switch.

An UBEX-MMU-X200 Matrix Management Unit (MMU) is required to control and supervise a virtual matrix, which can be created by connecting UBEX units as input and output endpoints to an Ethernet switch acting as crosspoint.The MMU device can update the firmware of endpoint UBEX units in a virtual matrix application simultaneously, without limitation for the number of devices in the setup.

One of the prime advantages of such new architecture is scalability: the virtual matrix created can have a virtually infinite number of endpoints, limited only by the number of open ports on the Ethernet switch used. Such a virtual matrix can be also extremely asymmetrical, as e.g. it could have only a few (or one) devices on the input side, while an almost unlimited number of output end units.

Using visually lossless compression, UBEX can extend two Full 4K UHD signals over a single, 10 Gbps Ethernet port. This generates substantial cost saving on the required Ethernet switch side, as with UBEX only half the router size is required compared to the needs of similar, 10 Gbps IP based architectures. For video signals which can be transferred within the 10G speed limit of a single optical fiber, a video signal redundancy feature is available employing the second optical fiber channel.

UBEX can also be used in a point to point setup as a conventional extender pair between endpoints. It is not required to use an Ethernet switch when point to point extension is required.

The maximum reachable distance is ranging between 400 m and 80km, depending on the type of singlemode or multimode optical modules installed in the device, and on the signal properties.

The internal power source of UBEX has Medical (60601) and ITE (60950) grade classifications for maximum reliability.

1 : for only one video stream

Lightware’s Ultra Bandwidth Extender, the UBEX is a new, optical solution, which allows 4K UHD@60Hz 4:4:4 uncompressed signal extension without latency, operating using a packet-based transmission instead of the conventional method. 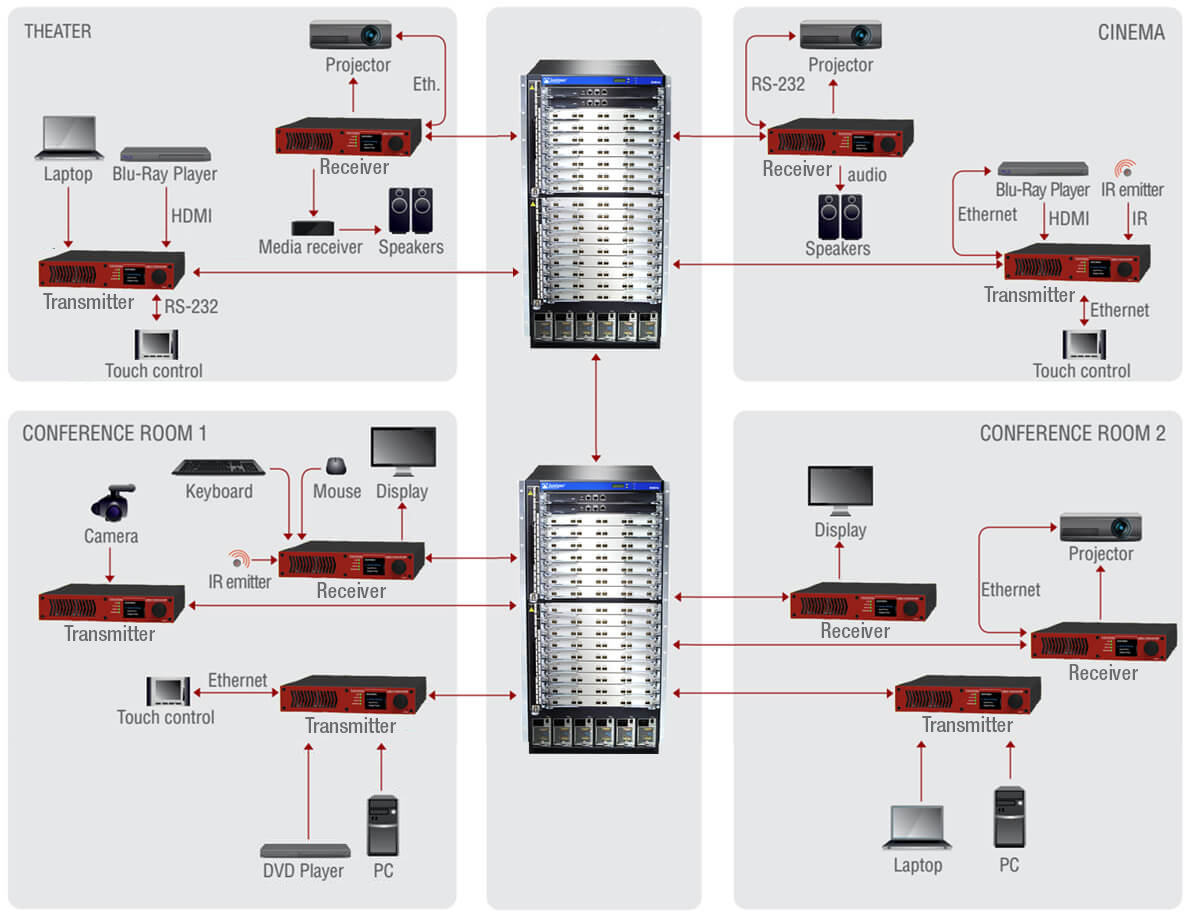