Lightware products were recently used to add video functionality in a high profile installation undertaken at the headquarters of a major London capital investment company.

Lightware products were recently used to add video functionality in a high profile installation undertaken at the headquarters of a major London capital investment company.

The installation was managed by systems integrator Display Manager and saw the remodeling of 12 meeting rooms based on eight different designs in the building. These ranged in size from a 30-seat conference room to small break out rooms designed just for a couple of people. Key to the client was that each room would be uniform in both look and in operation despite their differences.

They wanted to have unified, one button call-start in all eight different rooms, but the initial planned for Cisco Webex Room Devices solution required a third-party system controller for the project, which made that difficult. That’s when we became aware of Lightware and realised that we could take advantage of a more cost-effective and superior integration to the Cisco product.”

Most Cisco Webex Room Devices have only one HDMI input. A switch can add multiple inputs, and formats such as Display Port, DVI, VGA and USB-C, greatly expanding the functionality with no need for various dongles at the meeting room table or hidden in a local credenza.

Lightware’s open API environment meanwhile makes it possible for every bit of data to be openly available for higher level management, monitoring, and control applications.

[...] "That saved money, gave better usability, and the integration into a Cisco product felt more secure, for want of a better word, to the IT department. Everyone knows Cisco and trusts them end to end. [...Lightware] plays well with many other manufacturers, owing to its open API, so integration should all be fairly straightforward.” - explains Eales." 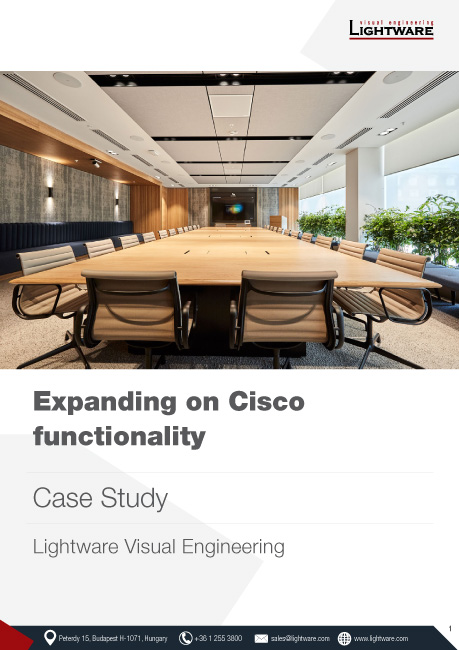